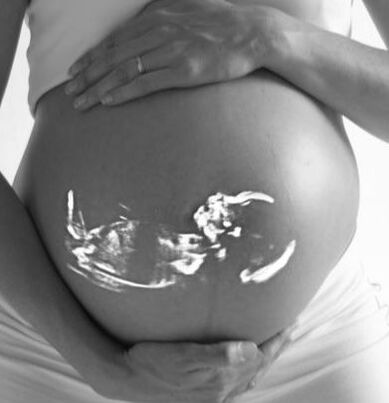 The embryo is a tiny speck, the size of a pencil point that is sometimes visible about the fourth week of gestation via vaginal ultrasound. By the end of four weeks baby is ¼ inch long (size of a grain of rice). The heart, digestive system, backbone and spinal cord are all beginning to form. Placenta begins to develop now also. The fertilized egg is now 10,000 times bigger than it was at conception. Blood cells are shaping and circulation will begin soon.
​Month Two (week 5-8)

﻿Baby has a primitive face taking form with big dark circles for eyes, the throat, lower jaw and mouth are now developing also. An eight-week-old fetus already has distinct facial features. By the end of month two, the embryo resembles a tiny human. The heart is beating, and the arms and legs are formed, with finger and toe buds appearing. Bone is just beginning to replace cartilage. During the second month, the embryo is extremely sensitive to chemicals, so be careful what you are around. The embryo will now also have all it’s major organs.  Veins are clearly visible and the heart has divided into right and left chambers.
Month Three (week 9-13)﻿

﻿Your baby's internal organs are already in place and ready for further development. If you have an ultrasound scan, you may see your baby wiggling and waving like mad, but you won't feel anything yet. By now baby is 2 1/2 to 3 inches long and is fully formed. He has begun swallowing and kicking (though you may not yet feel it till between 16 and 20 weeks!). The organs and muscles are beginning to function. Your unborn baby has now graduated to being called a fetus.
﻿ 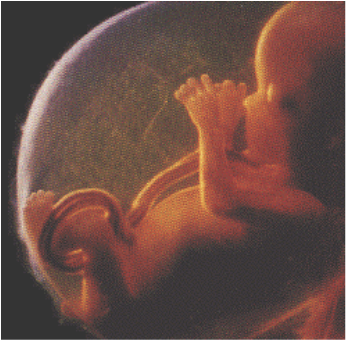 Month four ( week 14-17)
﻿
﻿The baby's skin in pink, somewhat transparent and is covered with fine hair called lanugo. His tiny fingernails are now visible. The baby's face continues to develop. Eyebrows and eyelashes begin to appear in this month. Buds on the side of the head begin to form into the outer ear and he can hear your voice now.

The tail has disappeared from the fetus and the head makes up about half of the baby's size. The baby's neck is long enough to lift the head from the body. The baby moves, kicks, sleeps, wakes, swallows, and passes urine. By the end of the fourth month, your baby will be 5 to 6 inches crown to rump in length and weigh about 5 ounces. Fat stores begin to develop under your baby's skin. The fat will provide energy and help keep your baby warm after birth. A cheese-like coating called vernix begins to cover your baby. The vernix  helps protect your baby's delicate skin from abrasions, chapping and hardening that can result from exposure to amniotic fluid.
﻿
Month Five (week 18-21)﻿

﻿During the fifth month, the fetus has a big spurt in growth. The mother can usually feel the strong kicks by the 20th-22nd week. Your baby is also growing muscle and is getting stronger every day. The fetal heartbeat can clearly be heard through a stethoscope. The blood cells take over for the liver, the job of producing blood. Your baby's gall bladder will become functional, producing bile that is necessary for digestion. Baby's teeth are already beginning to form within it's jawbone. Your baby's fingernails have grown to the tips of the fingers and he can clench his fists. On top of the vernis, Lanugo. a fine hair is covering the entire body. The fingernails have now grown to the tips of the fingers and baby even has a little hair on their head. The fetus may even suck its thumb or fingers now. The fetus will be 10-12 inches long and weighs about 1/2 -1 pound by the end of the month. At approximately 20 weeks the baby can start to feel your touch.  Caressing and massaging your tummy and responding to his kicks and nudges is the start of a positive two-way communication.  It also facilitates blood flow and calms your body.
Month Six ﻿(week 22-26)

﻿Your baby now has regular sleep and wake pattern that you will come to know. Startle reflexes are developing and your baby might respond to familiar sounds, such as your voice, with movement. His skin has lost its translucent appearance, but he still has not laid down any stores of fat and is therefore quite thin.

Your baby's brain is developing rapidly. Fatty sheaths which transmit electrical impulses along nerves are forming. There probably is some hair on its head, including eyebrows and eyelashes. Baby girls will develop eggs in their ovaries during this month. The baby's bones are becoming solid. The fetus’s hearing is developing all the time.  At approximately 23 weeks they can hear the mother’s heartbeat and by the end of 25 weeks they can distinguish sounds from outside the womb. They are always listening and at six months they can recognize specific voices.  Speaking, reading or singing to the fetus provides a calming effect and promotes voice recognition. Your baby is almost fully formed and looks like a miniature human. However, because the lungs are not well developed and the baby is still very small, a baby cannot usually live outside the uterus at this stage without highly specialized care. By the end of this month, the baby will be around 11-14 inches long and weigh about 1-1¾ pounds.
﻿ 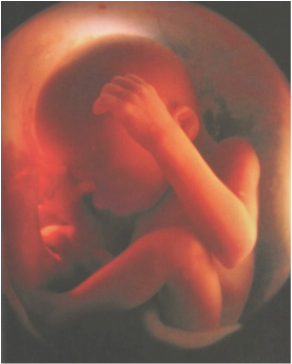 ﻿Your baby's hearing is getting better. He or she can now hear the outside world quite well over the sound of your heartbeat. Baby's skin is still wrinkled and red and baby controls its own body temperature now. The head is almost 3.5 inches in diameter and the feet are nearly 21/2 inches long. In boys, the testicles have moved down to the groin. For a while now, the umbilical cord has been the baby's lifeline to the mother. Nourishment is transferred from the mother’s blood, through the placenta, and into the umbilical cord to the fetus. Their bone marrow is now responsible for red cell production. These red blood cells will continue to support your child's body by transporting oxygen and removing the wastes. Your baby begins storing iron, calcium and phosphorus. The baby now weighs about 3 pounds and is around 16 inches long. He or she will gain about half a pound a week until week 38.
​A new study suggests that short-term memory may be present in the fetus at 30 weeks of age.  They found that the young
​neo-nate had a memory of ten minutes duration.  By 34 weeks they were able to store information and retrieve it four weeks later (Journal of Child Development, 2009).
​Month Eight (week 31-35)

Baby's face is now smooth and getting a little chubby, as baby is laying on fat stores over the next weeks in preparation for life outside the womb. You may feel less kicking now and more twisting and wriggling, as he is running out of room to move around in there. Your baby's kicks are strong and you may be able to see the outline of a small heel or elbow pressed against your abdomen sometimes. Most babies will have turned head down by this time in preparation for birth. If your baby were to be born now, it would have a greater than 90 per cent chance of survival. Your baby's skull bones are still pliable and aren't completely joined. This makes it easier for you to give birth to him, as the bones in his skull can overlap slightly as he moves down your vagina. At the end of this month your baby is about 16 to 18 inches long and weighs around 41/2 to 51/2 pounds. 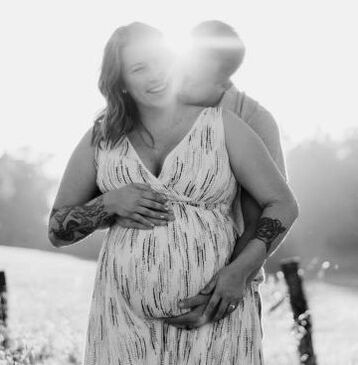 Your baby is now fully formed. Your baby is shedding the vernix which has been protecting it's skin. This turns the amniotic fluid, which was once clear, pale and milky. The outer layers of your baby's skin are also sloughing off as new skin forms underneath. Baby will gain weight at the rate of about an ounce per day during the last month before the birth. Your baby is getting fatter and its skin is less rumpled. The hair on your baby's head may now be thick, and his fingernails extend beyond his fingertips. Baby is getting ready for birth and is settling into the fetal position with its head down against the birth canal, its legs tucked up to its chest, and its knees against its nose.  The bones of baby's head are still soft and flexible to ease the process of delivery through the birth canal. Your antibodies to sickness are beginning to flow quickly through the placenta. The quick flow of blood through the umbilical cord keeps it taut which prevents tangles as your baby moves around.


At birth the umbilical cord will slowly stop working when the child takes his/her first breaths of air outside of uterus. The child's breathing will trigger changes in the heart that will force all blood to go through the lungs. However, the cord will continue to pump valuable blood to your baby, for about 3-5 minutes. So remember to ask you midwife or doctor not to cut the cord to soon!
At birth the average size for babies is around 7-8 pounds and around 20 inches long.

Remember only around 5% of babies are born on their due dates, this is just an estimate. Which is why, it is called an estimated due date! So try to be patient and trust that your baby knows when it's time to come out!
﻿

Although it may be confusing at first, most doctors and midwives begin counting the pregnancy from day one of the last known menstrual period. Yes, that is about 14 - 16 days before you even conceived. This can make it confusing when trying to convert weeks into months and count a month as 4 weeks. February is the only month with just 4 weeks. The average calendar month is 30.4 days, a little over 4 weeks and 2 days long. A normal pregnancy is 40+ weeks, or, a little longer than nine average months.

Days - 280 days from your LMP (last menstrual period) or 266 days from conception to birth (Fetal age).

One thing to note is - Four weeks from the first day of your last period you are considered "4 weeks pregnant", but, "it's week 5 of your pregnancy". This can get confusing, especially considering that your baby is actually, only about two weeks old.


Months [ Calendar ] - Measured as nine months on the calendar + extra 7 days for due date. According to the Gregorian calendar, where months range from 28 - 31 days, this means the average pregnancy lasts a little over nine months. 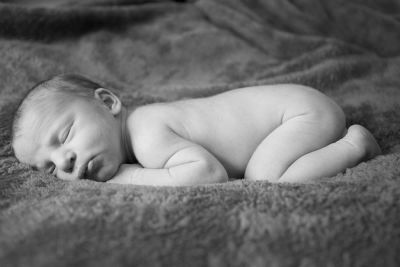 DISCLAIMER : Nothing on this site is meant in any way to be medical advice! Any questions or problems you may have, should be discussed with your caregiver! Thanks!
Top Of Page